LONDON, 16 April 2019 — Top travel-tech company, Kiwi.com, has explored the Top 6 festivals that should be on any audacious traveler’s itinerary this summer. The all-in-one festival guide is made possible by the leading online travel agent’s Nomad feature — allowing travelers to fully automate their routing to multiple destinations in one package.

The online travel agent has explored the best festivals to visit across a 6-week itinerary this summer. Adventurous festival-goers can lose themselves in a jam-packed trip across Europe, filled with house & dance. 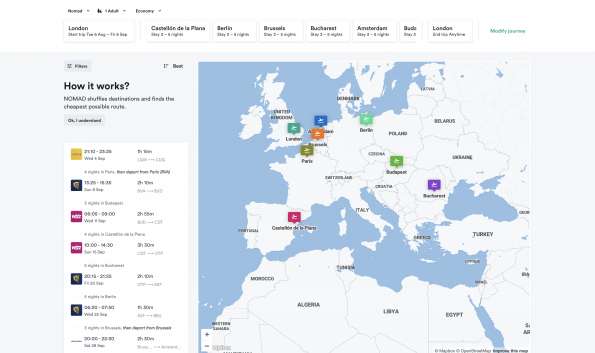 Lovebox is one of London’s summer highlights, with a line-up spanning every genre, from R&B and hip-hop through to grime and techno — there’s something for everyone. As well as the music there’s plenty of fun to be had for everyone — with roller discos, vintage fairs, body painting and a whole range of after-parties.

The Festival Internacional de Benicàssim is often abbreviated to FIB and takes place between Valencia and Barcelona. The line-up is always packed full of world-famous artists of every genre — this year’s consisting of names such as Lana Del Rey, Kings of Leon, Jess Glynne and Fatboy Slim.

Tomorrowland is one of the world’s largest and most notable electronic dance festivals — bursting with life and energy, the vibrant atmosphere of Tomorrowland is like nothing else. Past line ups include names such as David Guetta, Carl Cox and Afrojack. Tomorrowland is a festival every music lover must experience.

Untold festival transforms the city of Cluj-Napoca into the perfect holiday destination for electronic music lovers. With performances of more than 150 artists, this festival combines music with art and culture creating the ultimate Romanian experience. This year’s line-up features names such as Andy C, Tiesto and Kygo.

A festival famous both for its music and its culture, Sziget features a variety of genres such as pop, rock, and electronic dance as well as separate stages for alternate genres such as blues and jazz. This week-long extravaganza draws in hundreds of thousands of music fans from all over the world and has entertainment to suit everyone, with after-parties for those wanting to prolong the festival experience and day trips to Budapest for those wanting to discover new cultures.

Just a twenty-minute train journey from London, Reading is commonly known as a rock festival. However in recent years the festival has featured a more varied line-up. With artists such as Twenty-One Pilots, Post Malone and the 1975 featuring this year, this festival is becoming more and more popular every year.

For how Kiwi.com works:

Kiwi.com (formally known as SkyPicker) was founded in 2012 by Oliver Dlouhý and Jozef Képesi. The travel tech company was created for travelers by travelers. Powered by its proprietary algorithm that allows users to combine flights from over 500 airlines (Virtual Interlining), including many that do not normally cooperate, and its industry-leading Kiwi.com Guarantee, it is one of the fastest growing technology companies in Central Europe. It entered the 2017 Deloitte Technology Fast 500 EMEA list in 7th place, becoming the highest ever ranked Czech company. Today, the company sees more than 100 million flight searches every day and employs over 2600 people worldwide. 2018 saw the launch of Nomad, a revolutionary new way to combine cheap flights and Tequila, the new B2B platform is for partners of all sizes. In the second consecutive year, Kiwi.com was named the best Start-up of the Czech Republic by the Czech Forbes Magazine (June 2018).