Spider-Man™ and Kiwi.com team up to take fans far from home

London, 28 June 2019 — Kiwi.com and Sony Pictures Entertainment have joined forces to celebrate the release of Spider-Man: Far From Home. Eighty-four lucky fans will have the chance to be the hero of their own journey and follow Spider-Man around Europe.

Every day for three weeks, two winners will receive their own dream MultiCity adventure, powered by Nomad from Kiwi.com, with a value of up to €1,000 per prize. And they can take a friend!

The competition is running in the UK, France, Germany, Italy, Spain, and the Czech Republic between 26 June and 16 July.

Watch the Spider-Man: Far From Home and Kiwi.com ad

Spider-Man: Far From Home is released in cinemas on 2 July. Following the events of Avengers: Endgame, Spider-Man must step up to take on new threats in a world that has changed forever.

Kiwi.com gives fans the chance to be the hero of their own journey

Oliver Dlouhý, CEO at Kiwi.com, says: “Kiwi.com is excited to team up with Sony Pictures for the release of Spider-Man: Far From Home and give fans the opportunity to relive some of their favorite moments from the movie by winning flights to the various film locations.”

The competition is powered by Nomad from Kiwi.com — a search feature that finds the most economical and most efficient MultiCity routes, meaning that incredible adventures don’t have to cost the earth.

Dlouhý continues: “Our Nomad feature, which redefines multi-destination travel, perfectly reflects the speed and ease of travel that Spider-Man enjoys.” 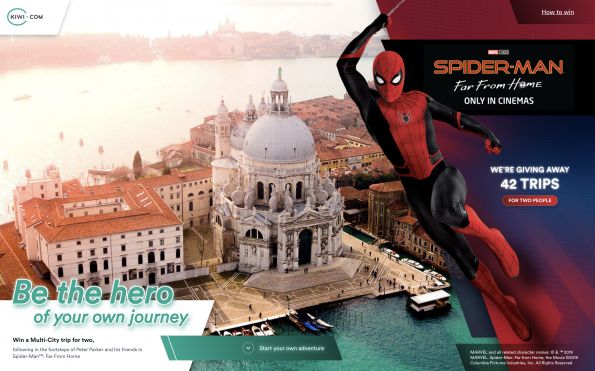 Andre Seddoh, Vice President International Marketing Partnerships at Sony Pictures, says: “We are delighted to be working with Kiwi.com to offer travelers from around the world a chance to follow in Peter Parker’s footsteps in Spider-Man: Far From Home. Sony Pictures is always looking to revolutionize the ordinary with promotional partnerships that offer brands a platform to create cut-through content using our unique IPs to tell engaging stories. Our collaboration with Kiwi.com fits organically into the film’s story of Peter Parker leaving New York to explore some of the biggest cities around Europe, and we can’t wait to see how Spider-Man’s latest adventure inspires travelers to go on an adventure far from home.”

Sampsa Nuotio, Head of Content and Creative at Kiwi.com, says: “At Kiwi.com, we’re all huge fans of Spider-Man. We identify with the characters’ young, techie spirit and share their passion for adventure.”

For the chance to win one of the Spider-Man: Far From Home NOMAD trips from Kiwi.com, fans can visit: https://www.kiwi.com/en/spider-man

There they will be offered a trip from their location to Berlin, London, Venice and Prague. They can enter immediately for a chance to win this trip, or can modify the dates and route to include multiple cities, anywhere in the world. Nomad will find the most economical and most efficient route for their holiday.

Two winners will be drawn every day. They will win a trip for two up to the value of €1,000 per prize. Once a fan has entered, their name will stay in the hat for every following draw until 16 July. Entry is free and no purchase is necessary. Winners will be chosen at random.

Kiwi.com powers more than 100 million flight searches every day and employs over 2,600 people worldwide. It is one of the fastest-growing technology companies in Central Europe. It entered the 2017 Deloitte Technology Fast 500 EMEA list in 7th place, becoming the highest ever ranked Czech company. For the second consecutive year, Kiwi.com was named best Start-up of the Czech Republic by Czech Forbes Magazine in June 2018.

2018 saw the launch of Nomad, a revolutionary new way to combine cheap flights, and Tequila, a B2B platform for partners of all sizes. Also in 2018, Kiwi.com incorporated ground transportation into its search technology.

Nomad from Kiwi.com is a way of searching for the cheapest route between multiple cities. Decide which cities you’d like to visit, the date you’d like to begin your trip, and the length of time you’d like to stay in each place. NOMAD then finds the cheapest order to travel between the cities, saving you as much money as possible.

ABOUT SPIDER-MAN™: FAR FROM HOME

Following the events of Avengers: Endgame, Spider-Man must step up to take on new threats in a world that has changed forever.