Kiwi.com’s comprehensive view of global flight content, shows 2022 as the return of normality after the pandemic, seeing not only the return in travel interest but an increase in demand as consumers make up for lost travel time. Bookings made in 2022 globally have overtaken the pre-pandemic 2019 volumes* by 53%.

Searches made on a global scale at Kiwi.com are at 31 billion compared to the 20.4 billion made in the previous year.  The top destinations searched were London, Istanbul, Barcelona, Bangkok and Paris.

The most traffic came to Barcelona–El Prat, Kuala Lumpur International, London Stansted, Vienna International and Budapest Ferenc Liszt International airports, which were the most booked airports to fly to in 2022**.

While the United States were consecutively on top in previous years, the travel restrictions pulled them down in 2022.  Turkey, which appeared in the top five last year due to becoming the main connection hub during the pandemic, with the re-opening of other major hubs across the globe, dropped to eighth place this year.

On the other hand, South-East Asian destinations that had strict restrictions during the pandemic and were late to recover, started to hit top positions in 2022, a trend that is even more visible for 2023. 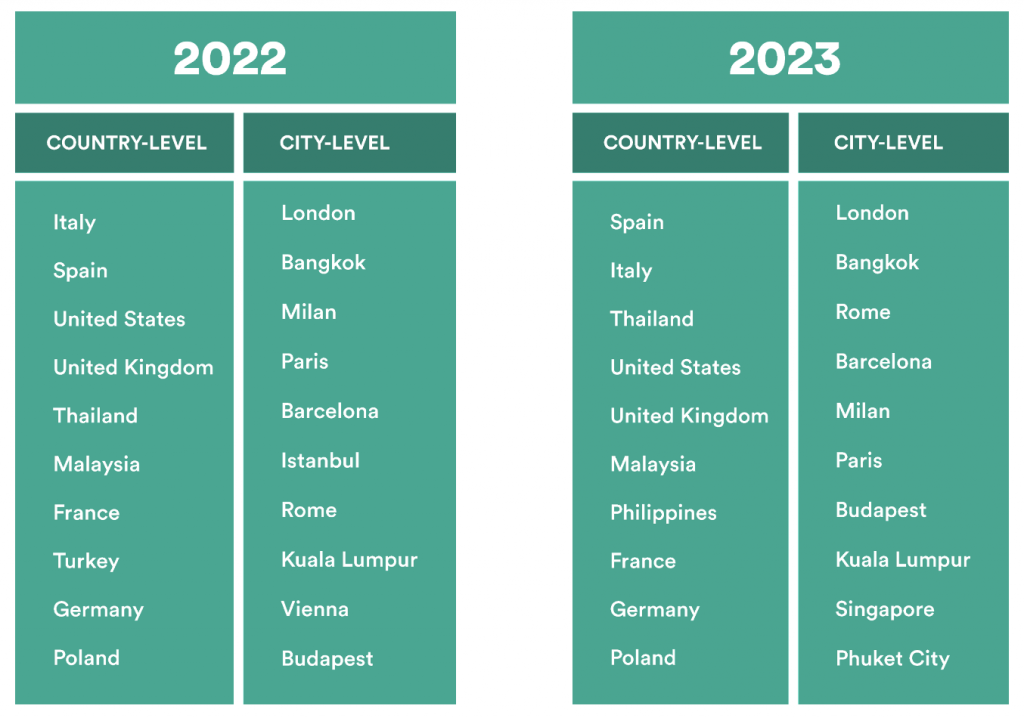 While a drop in prices was recorded in 2020 and 2021, this year was marked by a return to pre-pandemic prices and even slightly higher prices when it comes to medium and long-haul flights. 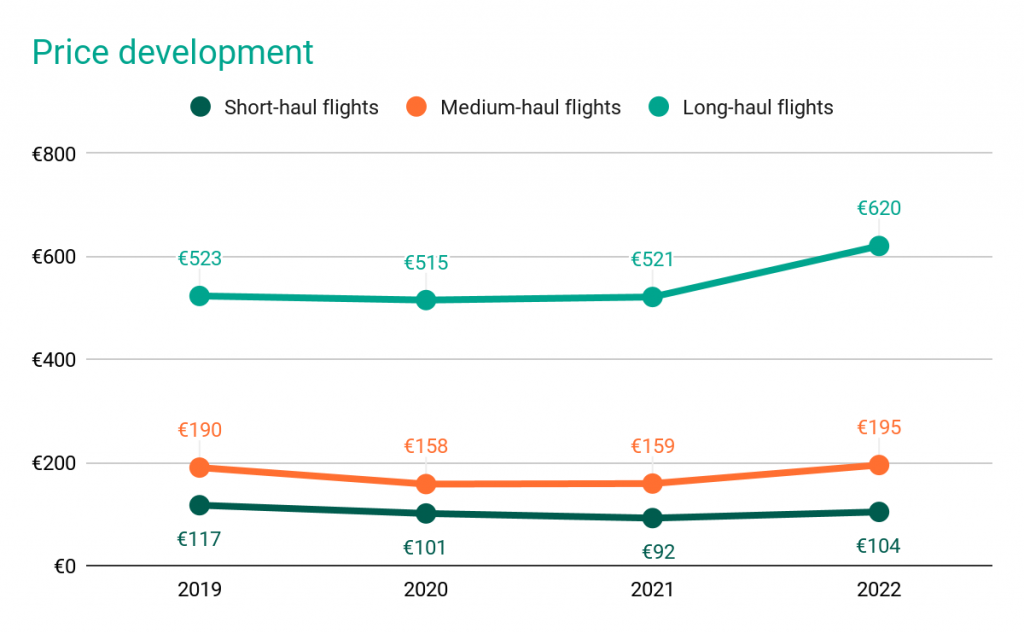 “Last year, the demand for long-haul flights on Kiwi.com was one-third of 2019 demand globally.  This year we see long-haul meeting the pre-pandemic levels by 90%.  The increased demand and the increased fuel price results in more expensive tickets.  Shorter flights are less affected as the fuel is a smaller part of the ticket cost.  On longer flights, the majority of the ticket cost is for fuel, and this difference in price becomes visible,” says Eliška Řezníček Dočkalová, Director of Customer Experience at Kiwi.com.

The time passengers who book return flights on Kiwi.com choose to stay at their destination hasn’t seen a big difference.  The most popular options in 2022 remain short getaways of up to three days – 41%, followed by slightly longer getaways of four to six days – 28% and longer trips of one to two weeks – 22%.

Kiwi.com customers visited in total over 200 countries and 3000 cities.  Over 200 nationalities booked their trips in 2022.  Those traveling mostly were Americans, British citizens, Spanish, Italians and Germans.

Flights from Europe this year are seeing a similar development.  Bookings have grown 65% compared to 2019, while searches are almost at 15 billion with most searched destinations being Barcelona, London, Istanbul, Paris, Palma de Mallorca, but also overseas destinations such as Bangkok, Dubai and New York.

While searches show an interest in further distance destinations – this is not reflected in bookings European passengers made.  Spain and Italy, on the country level, are holding the top spot for three years, and so far a similar trend can be seen for 2023 as well. They are followed by other big European countries such as the United Kingdom, France, and Germany, while in the case of 2022, Poland also appeared in the top five.

On the city-level, Barcelona is back in the top three after dropping out of it in the past two years.

Prices in Europe saw minor increases compared to 2021 and 2020, however, apart from long-haul flights, they are still cheaper than in 2019. 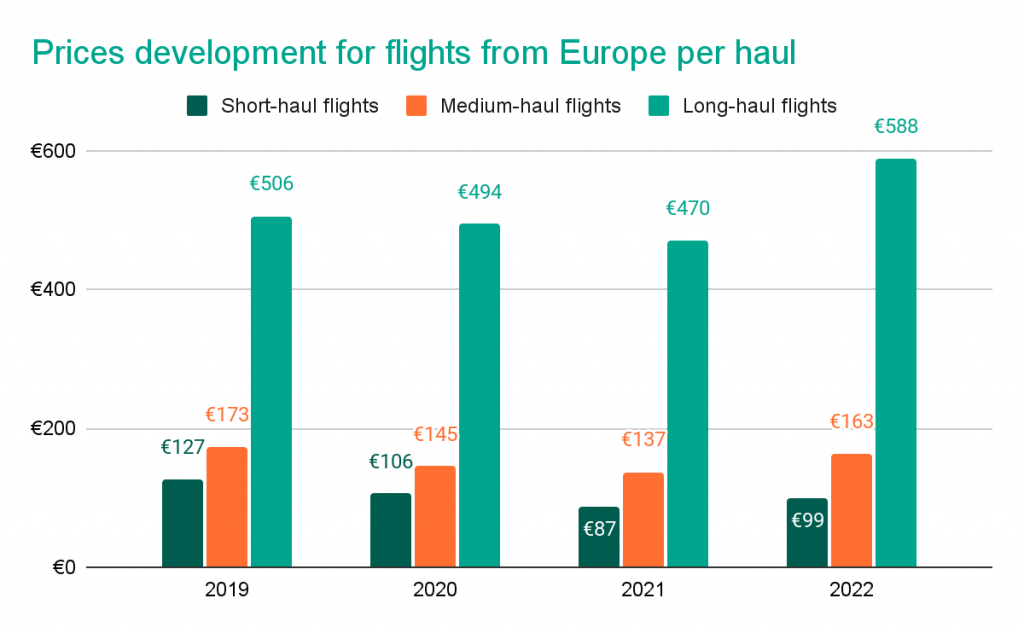 The time in advance European travelers book their flights has increased by six days compared to 2021, making a total of 28 days, but nine days less than in 2019.  Almost one in ten (18%) of travelers book their trips less than three days in advance, while 32% are now booking from three weeks to two months in advance showing the rise in travel confidence. Then there is 9% who book four to six days in advance, 16% one to two weeks and 11% two to three weeks.

Similarly to the global stats, European travelers booking return flights, mainly go for three types of trips: those that last up to three days (41%), four to six days (28%) or one to two weeks (23%).

In total European travelers using Kiwi.com to book their travel visited more than 200 countries and 2000 cities.

Over 200 nationalities traveled from and within Europe a total of 9,499,997,948 km, with British, Italians, Romanians, Germans and French booking tickets more often.

** Bookings made whenever to travel during the mentioned year

Kiwi.com is a leading global travel tech company headquartered in the Czech Republic, employing over 1,500 people worldwide. Kiwi.com’s innovative algorithm enables users to find better route options and prices other search engines can’t see, performing 2 billion price checks per day across 95% of global flight content. 100 million searches are carried out every day on Kiwi.com’s website and an average of over 60,000 seats are sold daily.