Despite the pandemic, the Czechs are still booking tickets – they are attracted by low prices to European destinations

Despite the unfavourable development of the coronavirus pandemic, Czechs still want to travel, according to current Kiwi.com data. For October and November, people are mostly booking flights to European destinations. Cheap flights starting at a few hundred crowns are a great attraction for travellers, along with the more favourable epidemiological situation in other countries.

These are not short visits: on average, people want to stay in their destination country for a week. This is probably also a result of low ticket prices. For example, a ticket from Prague to Rome can be purchased on Kiwi.com for as little as CZK 322, while a trip to Barcelona in the last week of October is only CZK 705.

Prices for destinations such as Brussels, Malaga or Vienna start at 550 Kc per passenger. If not sure where to travel, Kiwi.com offers filter “Anywhere” as final destination as a travel inspiration. 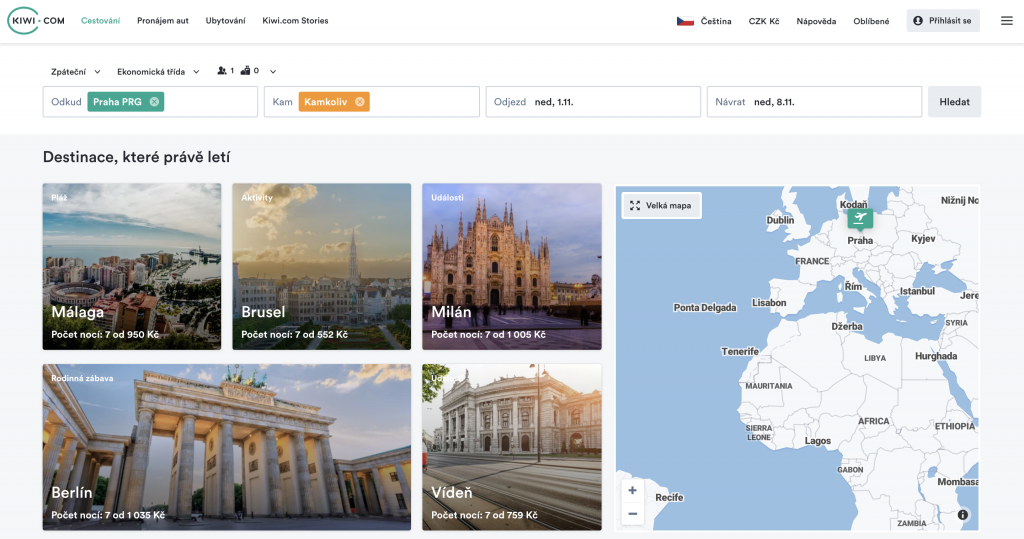 “Prices are significantly lower than last year. You can find tickets to the United Kingdom up to a third cheaper than they were,” says Eliška Dočkalová, director of customer experience at Kiwi.com.  Eliška also notes that foreign travel could be more attractive due to milder COVID-19 restrictions in other countries as well as the relatively low risk of transmitting the infection while travelling by plane, which according to the latest IATA research is even more unlikely than being struck by lightning.

“Passenger safety is, of course, enhanced by the mandatory wearing of face masks, which have been necessary items of travel equipment since June this year,” says Eliška Dočkalová.

Kiwi.com is currently working on a solution to provide customers with a refund if they are unable to travel for any reason. “We want to bring passengers an above-standard service that will facilitate this. When booking tickets, they will be able to choose between several types of fare according to their requirements,” says Eliška Dočkalová.

Kiwi.com was founded in 2012 by Oliver Dlouhý and Jozef Képesi. The travel tech company was created for travelers by travelers. Its proprietary algorithm – Virtual Interlining – allows users to combine flights and ground transportation from more than 800 carriers, including many that do not normally cooperate. Kiwi.com powers more than 100 million searches every day and employs 2,000 people worldwide.